Building an Isolated Wireless Lab Space on a College Campus 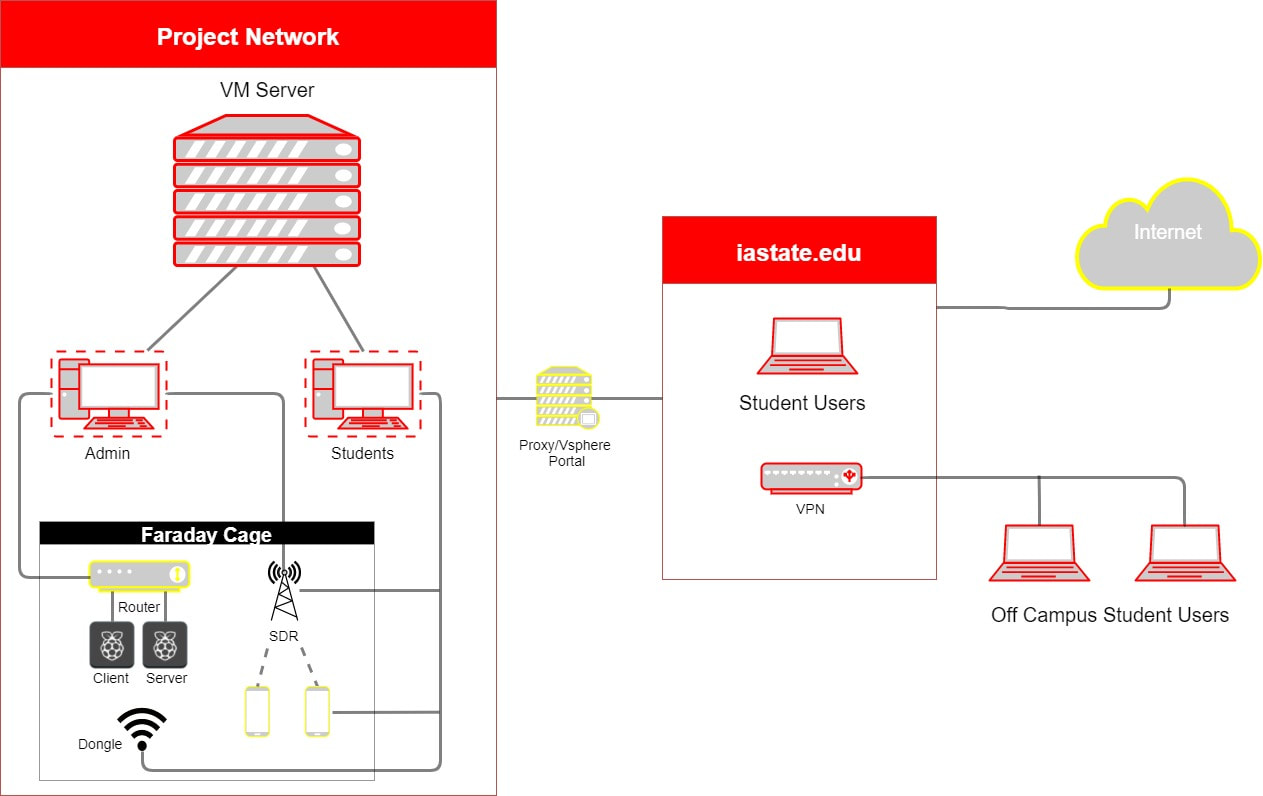 ​​
The project team is comprised of six members, including myself, the Software Design Lead.

Currently, wireless security courses here at Iowa State University utilize wired testing environments which simulate traffic so that students may observe and interact as if they are on a real network. This method is hard to scale, requires a great deal of equipment, and is also difficult to contain. Therefore, the proposed solution is for the creation of an isolated wireless facility for graduate coursework in wireless security.
​
To isolate these networks, a Faraday cage must be created which encapsulates the equipment such that only authorized users can connect to it. Additionally, these networks would be secured from the campus network using a proxy server so that undesirable traffic would not escape into the wild, and outside traffic will not be visible in the cage. Another part of the project is to provide curriculum in the form of lab experiments which will be developed to highlight the educational value of these isolated networks.

In addition to contributing to the general team responsibilities, my job thus far as the Software Design Lead has been to work with the Network Lead, Dalton Handel, to set up the cell network environment within the Faraday Cage. To do this, it was necessary to find an open source cellular infrastructure software to be built on a software-defined radio such that mobile phones could interact with the network. Thus far, Dalton and I have selected OpenBTS as the cellular infrastructure, the USRP-2920 for the software-defined radio, and an Ubuntu Server 16.04 LTS for the build environment. After some research and reverse-engineering, we were successfully able to build the cellular environment onto the software-defined radio to begin accepting mobile traffic.
Connecting cell phones, tablets, laptops, and desktops to a network is primarily conducted through wireless access. Typically, these connections are not secure, can be easily monitored or intercepted, or both. While existing courses can somewhat replicate simple wireless scenarios in a lab for students, doing so involves a great deal of equipment. The overlap of the wireless channels also makes it difficult to set up more than a few wireless access points for students to work with. Further, these wireless connections can be accidentally used by unsuspecting innocents as they connect with real world communication and that traffic finds itself on the laboratory wireless network being sniffed.
​
By creating these isolated networks, the possibility of sniffing the traffic of innocent bystanders is eliminated and a simple environment for students to learn about wireless security is created. Professors will be equipped with a strong learning tool that can always be expanded upon by creating realistic scenarios in these mini environments and allowing students to observe and even play along. The cage will create an opportunity to learn about cellular networks, which have yet to be explored in existing courses at Iowa State University.